Literally a true heat battle in the Green Hell 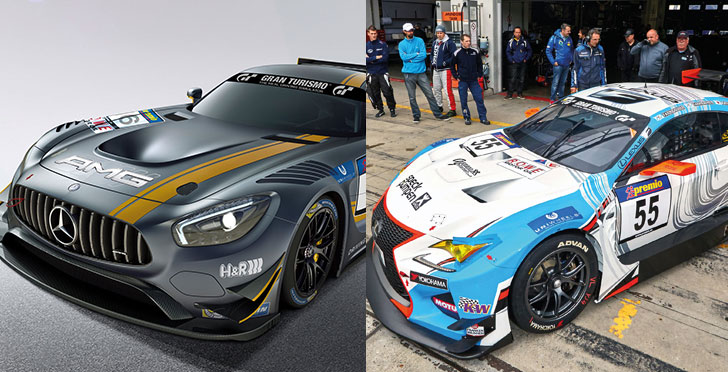 The temperatures are rising, the sun is shining – together with the midsummer, the crucial phase of the season has started. But whilst the fans around the Nordschleife will definitely enjoy the race day under these conditions, the weather may provide a hard time for many drivers at the fourth round of the VLN endurance racing championship. Both the cars and the drivers will for sure have to struggle with the heat and this even though the ‘Green Hell’ makes the drivers easily sweat already heavily even without the help of the sun. All the drivers, teams and motorsport fans can nevertheless hardly wait until the 4th of July when the colourful grid will fight for points and cups during the 46th Adenauer ADAC Worldpace Trophy race to take place at the track combination of the Grand Prix Circuit and the unique Nordschleife. Exciting and close fights up to and including the last race lap can be expected in the many classes.

Whilst the established teams and cars in the top overall places will be fighting about a position on the podium, the winning cars of tomorrow will undergo testing in the class of VLN Specials X. The spectators at the fourth round of the VLN endurance racing championship season may look forward to even two world premieres. On one hand, the new Mercedes AMG GT3 will be tested for the first time under racing conditions after it was presented to the public at the Geneva Motor Show. The car will be driven by Bernd Schneider, Thomas Jäger (Munich) and Jan Seyffarth (Leimbach/ Germany), three experiences AMG test and development drivers. On the other hand, the new Lexus RC F GT3 will have to demonstrate its potential in the hard competition at the Nordschleife. So this race will mark the debut of the Japanese manufacturer in GT3 racing. The first cockpit will be shared by Markus Oestreich (Petersberg/ Germany), Jordan Tresson (France) and Lorenz Frey (Switzerland) and the second car will be driven by the Farnbach brothers Mario and Dominik (Ansbach and Lichtenau) who will for the first time be competing together in one team. It is true that the SP-X race cars will make their debut but that will not delimit the motivation of the teams and the drivers – and who knows, there might be a big surprise and one of them will take the victory straight away.

The starting grid that includes all the regular contenders in class SP9 will be very interesting this time again. In addition to the two BMW Z4 GT3 of the Walkenhorst-Team, two SLS gullwing race cars, one entered by the Team Rowe Racing and one by the team Car Collection, will again be on the grid. The Team Phoenix Racing will rely upon an Audi R8 again and thus represent the manufacturer from Ingolstadt/ Germany. The GT3 pack will be completed by the Porsche 911 of the teams Manthey and Falken Motorsport.

The class of SP7 vehicles that will figure the impressive number of 18 cars will as always also provide exciting battles. Some of the drivers in this shark pool that is made up of the modified Cup Porsche race cars had already climbed up on the podium during the current year and are more than keen to repeat their successful results. In the Porsche Cup class, the Team Raceunion Teichmann Racing will have a home game as they are competing for the MSC Adenau which is at the same time the organiser of this race. In the car with start number 112, Niclas Kentenich from Neuss/ Germany will celebrate his comeback from his involuntary break from racing and compete in a team with Marc Hennerici (Adenau/ Germany) and Christian Menzel (Kelberg/ Germany). The 26-year old was unfit for racing due to an accident suffered in the practice of the first VLN race. Now, just after his recovery, he is really already looking forward to his comeback at the Eifel track. “My injuries have been healing very well and I don’t have any pain. I feel well and I cannot wait to start racing again”, he informed his fans on Facebook.
The third round of the VLN series two weeks ago impressively demonstrated that in particular the Cup classes provide excellent motorsport action. The cameramen almost failed to capture all the fights about positions and the overtaking manoeuvres. The fact that the forthcoming racing Saturday will probably not be different in this respect is already confirmed by the record starting grid in the BMW M235i Racing Cup with 22 cars. The Opel Astra OPC Cup and the TMG GT 86 Cup, too, will get ready to make the hearts of all true motorsport fans beat faster.

All those who do not want to miss this show do not have to dig deep in their pockets. Family-friendliness is a keyword in this popular grassroots series. Tickets for access to the open grandstands at the Grand Prix Circuit, including a visit in the paddocks, in the pit lane and on the starting grid, are available at the cash boxes at the price of 15 Euros. Young people up to an including the age of 14 years have free entrance. The entry to the adventure ‘Green Hell’ all around the Nordschleife is free of charge. The start to the four hour race will be given at 12 o’clock on Saturday. The positions on the starting grid will be determined previously between 08h30 and 10h00 in the timed practice