Stars and top-class drivers at the second VLN round 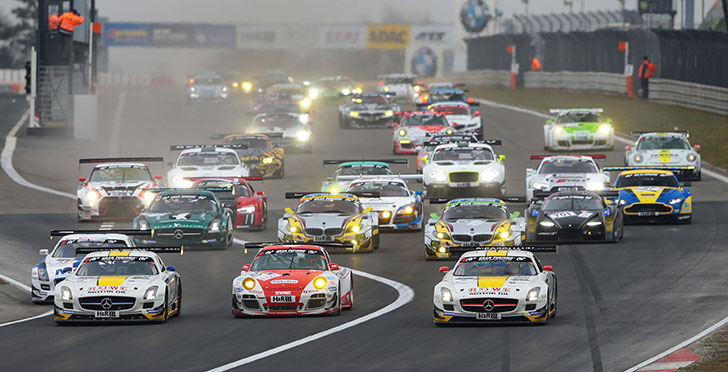 The Renngemeinschaft Düren e.V. im DMV, organiser of the second VLN round, is thrilled about the 190 cars that have been entered for their 40th DMV 4 Hour Race. This second race of the VLN endurance racing championship taking place this Saturday, 25th April 2015, will run over the usual duration of four hours on the 24.358 kilometres long combination of the short version Grand Prix Circuit and the legendary Nordschleife. The best of the best from the European long distance racing expert group will join this event where DTM stars, sports car experts and touring car aces will compete against promising rookies and ‘old hands’ at the Ring – a mixture which will make the hearts of the committed motor sport fans beat faster. The race will be started at 12 o’clock exactly and the fight for the best grid positions will previously take place between 08h30 and 10h00. The entrance is free all around the Nordschleife. Those who want to get into the paddocks, including the pitwalk in the break between the practice and the race, to gain access to the starting grid and to see the action from the open grandstands at the Grand Prix Circuit will have to pay the family-friendly price 15 Euro per person for the whole package. Youngsters up to and including 14 years of age will have free entrance.
The top group in the provisional list of entries includes 24 GT3 race cars, 18 cars in the class of VLN Specials up to 4,000 cc cylinder capacity (SP7), six Cup nine eleven Porsche and two SP-PRO race cars and thus provides a fantastic variety at this second VLN round. Regarding the technical specifications, more than a quarter of the about 190 cars will have the chance to finish on the podium.

Just one week before the DTM season-opener at the Hockenheim, some current DTM drivers will also come to the Nürburgring to compete in the VLN race. Maxime Martin (Belgium) and Augusto Farfus (Brazil), driving for BMW, and Audi driver Nico Müller (Switzerland) will participate in the VLN event on Saturday. All of these three will have to stand up to former DTM drivers in class GT3, on top them the meanwhile triple Le Mans winner Marcel Fässler (Switzerland) who is competing for Audi and DTM record champion Bernd Schneider (Bottighofen/ Germany), entered by the Black Falcon Team in a Mercedes-Benz SLS AMG GT3. Schneider will be challenged by competitors relying on the same cars as ROWE RACING and the Haribo Racing Team have also entered the same GT3 race cars with top class driver teams respectively. One should, however, also not underestimate the Porsche teams, amongst others represented by the crews of Manthey and Frikadelli Racing, who are completing the sports car quartet ‘made in Germany’. Their biggest rivals will mainly come from Great Britain – Aston Martin and Bentley – as well as from Asia with the Lexus and Nissan race cars. Not to forget finally of course also the Italian super sports cars from the make of Ferrari with the logo of the jumping horse representing the hot southern temper.
The two drivers from the Touring Car World Championship, Tiago Monteiro (Portugal) and Gabriele Tarquini (Italy), will carry on their preparation of the Touring Car World Championship round to take place during the ADAC Zurich 24h Race. The duo will start in the Audi TTRS prepared by Rotek Racing and VLN shareholder MSC Adenau will figure as competitor. They will under normal circumstances not be able to fight for the overall win but their major concern is to get the best possible preparation at the Nordschleife. Both drivers have completed a perfect preparation so far and hope to get another advantage in racing experience for the two WTCC races in May. Sabine Schmitz (Barweiler/ Germany), VLN champion in the year 1998, will also take the opportunity to compete as a guest driver in the WTCC in May and she will do her best to challenge the otherwise exclusively male competitors in this championship and to use her advantage in the experience she has at racing at the Nürburgring.
Even though the endurance racing championship does not have the status of a World Championship, the grid would be worth the allocation of a title as a World Championship regarding its internationality. Drivers from Australia, China, Japan, Malaysia, New Zealand, Saudi Arabia, Thailand, the United States and the United Arab Emirates are represented just as drivers from all over Europe. Looking into some statistic figures, it becomes obvious that more than 480 drivers – amongst them 14 female drivers – from 31 different nations and together with vehicles from 22 different car manufacturers create the colourful diversity at the 40th DMV 4 Hour Race. This is certainly unique worldwide.

In addition to the battles about the overall win, exciting motorsport is provided in the VLN endurance racing championship in many respects. From amongst the Cup classes, in particular the BMW M235i Racing Cup stands out this year. More than 20 compact sports cars from the Bavarian manufacturer will start in class Cup 5 in which experienced long distance race drivers have gathered to determine the top of the top from amongst them. The class of VLN Specials up to 2,000 cc cylinder capacity (SP3) currently experiences a renaissance. After some years with poor entries, the champion class of the year 2010 when Mario Merten and ‘Wolf Silvester’ became the winners is today again one of the strongest classes. With 13 cars respectively in the Opel Astra OPC Cup class and in the class of VLN production cars up to 2,500 cc cylinder capacity (V4) according to the provisional entry list, a lot of points can be gained in these classes, too. The production car class figures amongst others the current champions Rolf Derscheid (Much/ Germany) and Michael Flehmer (Overath7 Germany) who are so proud to display start number 1 on their BMW 325i 2015.