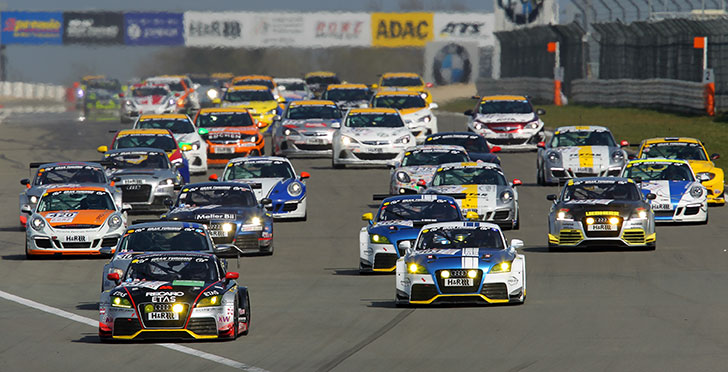 The 39th season of the VLN endurance racing championship at the Nürburgring is approaching fast. This unique racing series at the Nordschleife will start into the motorsport year 2015 with the 61st ADAC Westfalenfahrt to take place on 28th March. And its popularity with the participants is unbroken. More than 240 teams and drivers have registered for the championship. This result is even a little better than last year which presumably is a consequence of the first-time organisation of the endurance championship this year as an international series. Due to the new status, foreign participants will also have the opportunity to compete for prize money.

“The number of registrations is an important indicator and underline the commitment of the participants with our series”, explains Karl Mauer, VLN Chief Representative. “You must, however, not conclude from these figures that there will be something like 200 cars at the start of each race. Many teams register for the championship with several drivers; on the other hand, the registration is not a mandatory condition to participate in the races. I would be happy if we could conclude the 2015 season with a similar success in terms of starters as last year.”

In 2015 again, the VLN endurance racing championship Nürburgring will comprise ten races held on the 24.358 kilometres long combination of the Nürburgring short version and the Nordschleife. All the races will run over four hours with the exception of the Opel 6h ADAC Ruhr-Pokal-Rennen on 5th September. On the average, the grid figured 174 cars last year and 1,035 drivers from 39 different countries were competing in race cars from 27 different car manufacturers.

The registered vehicles in 2015 range from close-to-production touring cars up to the most sophisticated GT3 race cars. Nobody would nevertheless also like to miss the cup classes of BMW, Opel, Porsche and TMG in the championship as they frequently provide the icing on the cake with their exciting close fights in the make cups. Family-friendliness is a key word in the endurance racing series. Tickets with admission to the open grandstand at the Grand Prix Circuit, to the paddocks and to the starting grid are available at the box offices on-site for 15 euro. Young people up to and including 14 years of age have free entrance. All around the Nordschleife, the adventure ‘Green Hell’ is free. A one-day parking fee of 5 euro per car at the Grand Prix Circuit and the Nordschleife must be added which the circuit management will be charging for the first time this year.