An interview with Karl Mauer 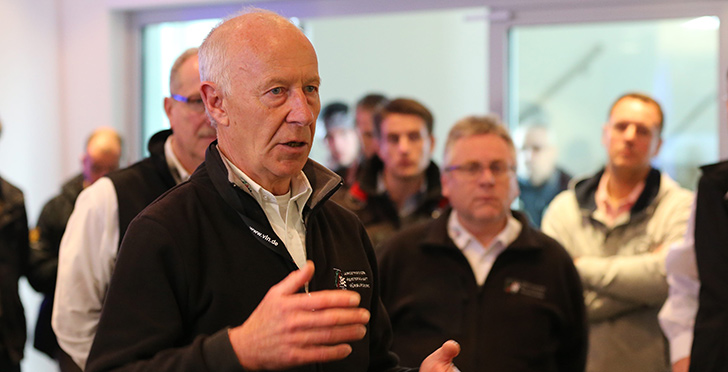 The 54th ADAC Reinoldus-Langstreckenrennen was affected by a race duration shortened to 165 minutes. The reason was the unusually high number of speeding offences under double yellow flags in the timed practice which had to be investigated by Race Control before the race could be started. Karl Mauer informs about the special circumstances at the fifth round of the VLN endurance racing championship in an interview.

It was not possible to start the fifth round according to schedule. What were the causes and reasons?
Race Control had to investigate several dozens of infringements of the code of driving conduct and speeding offences under double yellow waved flags at one single accident site. This process required much more time than the period available between the finish of the practice and the scheduled start of the race.

The number of offences war significantly high – do you have an explanation for that?
As a principle, everybody tents to make full use of the limits without any compromises or to even exceed these limits. It is reported that this has already been the case with the first human being. Moreover, there are individual and situation-related reasons such as the failure to recognize flag signals, passing a hazard area in a group of cars or similar.

What is the standard procedure for Race Control to penalize yellow flag infringements after the practice?
Race Control will first of all receive a report about a possible breach of the applicable rules. They will then investigate the incident, they will possibly have a hearing with the marshals involved and then decide on the penalty to be applied in compliance with the current regulations. The participant concerned will then be informed and given the opportunity to submit a statement and a final decision will be taken which will also be submitted to the Stewards. In cases of dispute, this panel will further deliberate the case.

Would there have been the possibility to investigate the cases and to apply the penalties during the race?
No, this would not be in line with the penalties provided for in the 2014 VLN Regulations for any such infringement in practice (Art. 7.3).

Was the shortening of the race part of the penalty? Teams who were not affected felt they were disadvantaged…
The shortening of the race represents a major damage that must in this form be avoided at further VLN races. In our case, teams were disadvantaged even though their drivers were not in breach of the regulations. An excuse of the VLN representatives is definitely due to these teams and drivers, no ifs, ands, or buts.

Why was it necessary to shorten the distance?
When Race Control determined the minimum race duration, it was their primary intention to provide the conditions for awarding full championship points. This worked successfully. The race distance finally resulted from the available time period between the start of the VLN race and the end of the permitted racing activities pursuant to the Nürburgring operating permit under consideration of a support race of the European Superkart Series.

The reason for the complete incident were almost 60 cars that were simply in breach of the regulations. How was the situation later in the race? Was the discipline better then?
The discipline in the race in situations which can be compared with the one in practice was definitely much better, in particular regarding the compliance with the maximum permitted speed of 60 km/h in the sector up to the green flag.

In addition to the VLN, also regarding the 24h Race: Is there a general problem regarding the discipline of the participants in long distance races at the ‘Green Hell’?
Of course, in the end it is always the participant who is primarily guilty. According to my observations, however, the current structure of the grid and an increase in professionalism, also in grassroots motorsport, result in a configuration of the competition which compels the success-oriented participant to drive more aggressively.

Regarding the reason itself: The cause was a double yellow flag situation in which may participants were much too fast. Does this incident put the system with the imposed speed limit and the control into question?
No. This system was introduced as a last tool to protect persons such as marshals, assistants or drivers who are exposed to critical situations. We must adhere to that objective. The challenge is to further improve the system and to adapt it in an even more sensitive way to the requirements in racing.

What can the VLN do to avoid any such situations in future?
The VLN must further develop its role as service provider and understand the participant more as their customer. The participants, however, on their side must also accept that despite all their motorsport ambitions they have to respect the applicable rules.