VLN at its best for the highlight of the season 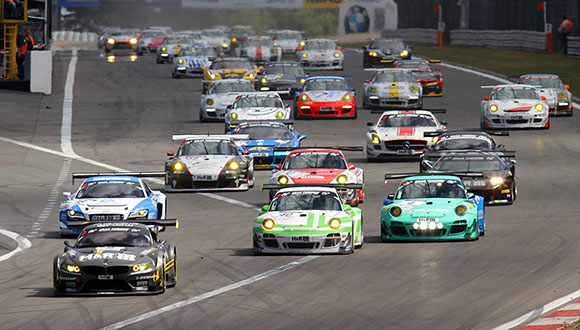 The highlight of the season in the VLN endurance racing championship will come up with a first-class starting grid next Saturday, 24 August. Thanks to the race distance of 50 percent over the average distances in the other races of this popular grassroots series, the Opel 6 Hour ADAC Ruhr-Pokal Race enjoys a very high reputation amongst participants and fans. So it is not a big surprise that the organising MSC Ruhr-Blitz Bochum has already received more than 210 entries for the fifth round this year. The weather forecast, too, is very promising so that nothing will stop the festival of a fantastic motor sport day at this traditional circuit in the Eifel region. Entrance all around the Nordschleife is free. Access to the paddocks and to the grandstands at the Grand Prix Circuit will be granted for the family-friendly price of 15 Euro per person; young people up to 14 years of age have free access. The race will be started at 12 o’clock exactly and the decision about the best positions on the grid will be decided in the timed practice between 08:30 and 10:00hrs.

Quantity and quality ist he slogan at the Opel 6 Hour ADAC Ruhr-Pokal Race because, in addition to the number of entered race cars starting from series production competition touring cars up to the most sophisticated GT3 race cars, the list of participating drivers, too, is considerable. A number of drivers in particular in the big classes appear on the list who definitely belong to the ‘crème de la crème’ in the international sports cars field. These top stars will meet upon a number of ambitious experts at the Nordschleife who themselves will be trying to finish in top places and who will certainly not be intimidated by famous names. A prime example hereby are the winners of the last VLN round, Klaus Abbelen (Barweiler7 Germany), Patrick Huisman (Netherlands) and Patrick Pilet (France). With Porsche works driver Pilet and the long year’s hobby racer Abbelen, both groups of drivers will be represented in one and the same team. And they are performing with a big success because their first victory for the team entered by the MSC Adenau was well deserved. Sabine Schmitz (Barweiler/ Germany) will this time join the team again after she had to pause due to an injury at the triumphal race in July. She will thus complete the driver quartet in the Porsche 911 GT3 R.

Back onto the track will also be the two Mercedes-Benz SLS AMG GT3 of ROWE-Racing. And the racing team which is based in Bubenheim/ Germany and which had scored a win at last year’s 6h Race will rely on well known drivers: The car with number 6 will be driven by Michael Zehe (Flörsheim-Dalsheim/ Germany), Marko Hartung (Wallroda/ Germany) and Nico Bastian (Frankfurt/ Germany) and the cockpit in the sister car with number 7 will be shared amongst Jan Seyffarth (Querfurt-Leimbach/ Germany), Lance David Arnold (Duisburg/ Germany) and Nico Bastian who will join both ROWE-SLS at the 6h Race. In addition to the SLS gullwing race car of Car Collection Motorsport which takes part in the VLN series on a regular basis, the two Mercedes-Benz customer teams will have to face tough competition by the British traditional racing team of Fortec-Motorsport. The SLS AMG GT3 will be driven by Trevor Foster as well as Stuart Leonard and Paul Wilson from Great Britain. The latter had already been competing this season in the VLN in class GT4 with a Ginetta.

An excursion into new territory at the 6h Race will be taken up by Manthey and Kremer Racing. Both teams have entered a Porsche 911 in class SP8 (VLN Specials up to 6,200 cc cylinder capacity). The main target of team manager Olaf Manthey is not to take away any points from the own drivers with the yellow-greed spearhead in class SP7 (VLN Specials up to 4,000 cc cylinder capacity); Georg Weiss (Monschau/ Germany), Oliver Kainz (Kottenheim/ Germany) and Michael Jacobs (Roetgen-Rott7 Germany), finishing third in the last race, are currently shown into a promising third position in the championship table. Furthermore, a new engine with more than 4,000 cc cylinder capacity had been installed in the 911 GT3 RSR of Jochen Krumbach (Eschweiler/ Germany) and Nick Tandy (Great Britain). The same applies for the Kremer nine eleven which is driven by Wolfgang Kaufmann (Molsberg/ Germany), Dieter Schornstein (Aachen/ Germany) and Peter Posavac (Essen/ Germany).

For the first time in this season, the current VLN Champion Ullrich Andree (Cologne) will be at the start. Together with Mario Merten (Kelberg/ Germany), he will start in an Opel Astra OPC for the team Bonk Motorsport. In the Cup class of the car manufacturer from Rüsselsheim/ Germany, he will meet upon the usually strong competitors participating in the make cup which was introduced this year as part of the endurance racing championship. The same applies for the TMG GT 86 Cup which was also introduced this year for the first time. The teams within this cup will also fight about wins and points with identical material. In the lead of the Opel championship are currently the two race drivers from Berlin, Jannik Olivo and Elmar Jurek. The Toyota series classification shows Arne Hoffmeister (Lutter/ Germany) in the lead who was entered by the Team Dörr Motorsport.