Full speed ahead to summer 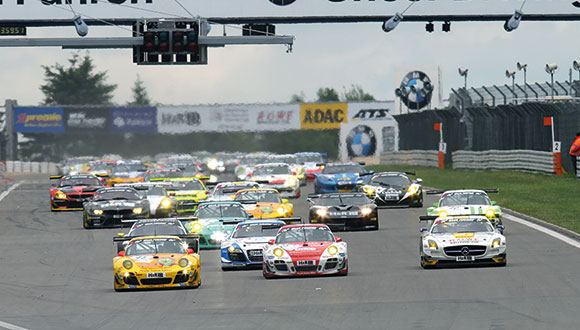 The show in the ‘Green Hell’ will continue on Saturday, 20th July. The calendar now figures the fourth round of the Nürburgring VLN endurance racing championship, the 53rd ADAC Reinoldus Langstreckenrennen organised by the Dortmunder Motorsport Club. More than 180 entries have been received for the 4 hour race at the 24.358 kilometres long combination of the Nürburgring short circuit version and the Nordschleife. “We are really delighted about the entry list”, says Tom Glodde, chief organiser of the DMC. “It must be noted that we have more than 20 cars which have so far not yet participated in any of the previous events of the endurance racing series during current season and which will certainly further increase the exciting show in the mid-field.” The organising team has also gladly studied the weather forecast with predicts bright sunshine and temperatures around 25°C. “There is nothing to stop a fantastic motor sport festival”, adds Glodde. Entrance all around the Nordschleife is free. Admission to the paddocks and to the grandstands around the Grand Prix Circuit will be granted at the family-friendly price of 15 euro per person, young people under the age of 14 years have free access. The start of the race will be given at 12 o’clock exactly after the timed practice between 08:30 and 10:00 hours with the fights for the best positions on the grid.

The newcomers in the 2013 season include a number of well-known drivers who have attracted a lot of attention in the last years already in the endurance racing championship. Martin Wagenstetter (Rosenheim/ Germany) will for example join the series for the first time again after 2011. Together with his long years team mate Auro Straffi (Italy), the Bavarian will drive a BMW M3 in the biggest class of VLN series production cars (V6). Another well-known driver is Walter Csaba (Hungary). After guest starts in the years 2010 and 2011 in the Schubert BMW Z4 GT3, the sports car experienced race driver will not start in rather an old but not less spectacular BMW M3 of the year 1993 in class H3. Holger and Helmut Pohlen (both from Geilenkirchen/ Germany) will rejoin the VLN family with an Aston Martin Vantage GT4 whereas Abdulaziz Al Faisal (Saudi-Arabia) and Dominik Baumann (Austria) will make their 2013 debut in the team along with Max Sandritter (Rabling/ Germany) in a BMW Z4 GT3 of the BMW Team Schubert.

In addition to the newcomers in the VLN, the race will of course also figure all the usual starters in the VLN endurance racing championship. The top two teams in the third race, Ferdinand and Johannes Stuck (both from Munich) as well as Frank Stippler (Bad Münstereifel/ Germany) in the Audi R8 LMS of the team Phoenix Racing and Peter Dumbreck (Great Britain) and Martin Ragginger (Austria) in the Porsche 911 GT3 R entered by Falken Motorsports are prepared to fight again for the overall victory. For Audi, the win in the 44th Adenauer ADAC Simfy Tophy race marked the tenth overall victory in the history of the championship whilst Ferdinand Stuck celebrated his first win.

When returning to the Nordschleife, Frenchman Kévin Estre will have a victory at the Porsche Carrera Cup race at the Norisring in his package – his fifth success in the current season of the Porsche make cup. The Cup specialist also scored another victory at the third VLN round in which he won the Porsche Cup class together with Christopher Mies (Heiligenhaus/ Germany) and Adam Osieka (Bonn/ Germany). The driver trio will start the 53rd ADAC Reinoldus-Langstreckenrennen in the same configuration – never change a winning Team!

The 181 cars in the provisional start list are divided into 77 cars in the group of VLN Specials, 48 VLN series production cars, 44 Cup vehicles and 12 group H cars. The more than 430 drivers, amongst them nine female drivers, are coming from 25 different nations and will start in cars of 21 different manufacturers.