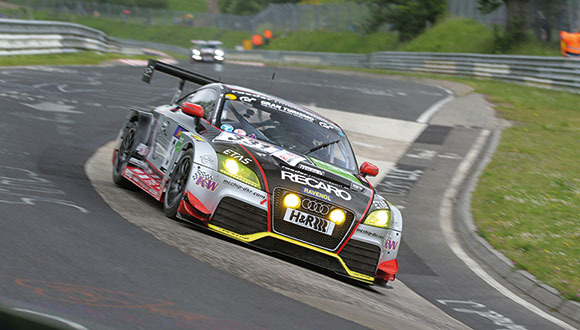 First trends have now become apparent after the first third of the Nürburgring VLN endurance racing championship season. Three out of nine races are meanwhile completed and those teams which have won their classes at each round have now come to the fore.

The current leaders in the championship are Christoph Breuer (Nettersheim/ Germany) and Elmar Deegener (Stelzenberg/ Germany) who have scored three victories with their Audi TT RS 2,0 of the team Raeder Motorsport in the class of VLN Specials up to 2000 cc cylinder capacity with turbo engines (SP3T). This is quite a surprise as the class SP3T with an average of 14 cars does by far not figure the highest number of participants in the various classes. The greatest number of competitors was scored in class SP9 for GT3 cars, with an average of 23 cars, followed by the class of the Opel Astra OPC Cup (19 cars) and class V6 of VLN series production cars (17 cars). In none of these three classes, however, any team has managed to score a row of victories.

The team in second position, Dirk and Tim Groneck (both from Melle/Germany) have also scored three wins with their Renault Clio. The average number of participants in class Cup 3 has been 13. Into third place follow Wolfgang Weber (Vilshofen/ Germany), Norbert Bermes (Krefeld/ Germany) and Rickard Nilsson (Balduinstein/ Germany), who have also finished first in all of the three rounds in the Aston Martin Vantage entered by Mathol-Racing, in class SP10 for GT4 cars (11 cars on the average).

Six more races are still on the calendar of this most popular grassroots series in Europe, and the 53rd ADAC Reinoldus endurance race will now follow on 20th July as fourth round. The decision in the championship will be really exciting as all of the teams have practically already had their strike result which counts for the final score of the season. Due to the fact that the third round did not run over the full distance, only half championship points have been awarded. The title contenders may thus not make any big mistakes now and the fans of the series may look forward to exciting motorsport in the remaining races.