Some statistics after the launch of the season 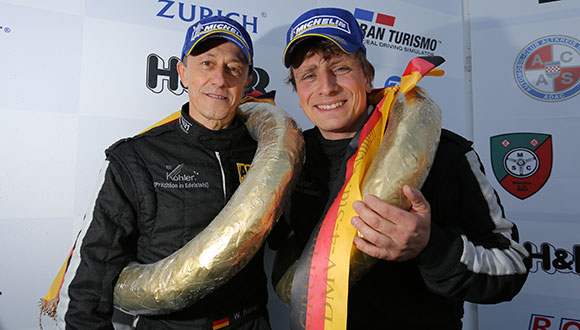 The opening round of the VLN endurance racing championship Nürburgring has brought up many stories. In addition to the top drivers of the BMW Team Schubert and of Timbuli Racing, four other drivers had good cause for joy, too. Christian Menzel (Kelberg/ Germany), Peter Hass (Lorsbach/ Germany), Hubert Nacken (Steißlingen/ Germany) and Ulli Packeisen (Wuppertal/ Germany) were celebrating statistical jubilees.

Menzel, together with Wolfgang Kohler (Aldingen/ Germany), won the Porsche Cup class in the nine eleven of Manthey-Racing – and thus also the group of Cup vehicles. This was the 20th group win for the local hero. Since the beginning of the recording of statistical figures on class wins, which was in 1990, Hass has scored his 65th victory. Together with Olaf Beckmann (Oststeinbeck/ Germany) and Volker Strycek (Dehrn/ Germany), he won class H2 in his Opel Manta at the 38th DMV 4 Hour Race. With their victory at the debut of the Opel Astra OPC Cup, Nacken and Packeisen have now scored 60 and 35 class wins respectively.

All of the drivers, however, consider these successful figures only as an interim result because they all aim at gaining more wins. None of them intends to rest on his laurels.

The make of BMW marked a milestone in the statistics about the classes. Since 1990, the total of 1,400 teams with racing cars from the Bavarian factory has achieved first places in their corresponding class. In addition to the race winners Müller, Müller and Farfus (BMW Z4 GT3, SP9), the teams with Mies, Akata, Silvester (BMW Z4, class SP3), Lang, Rettich, Muytjens (BMW M3, SP5), Petry, Unverhau, Hartwig (BMW M3, SP6), Butz, Hörter (BMW 318iS, V2), Derscheid, Flehmer (BMW 325i, V4), Diener, Küchenmeister (BMW 120d, VD1T) as well as Barrow, Morrow (BMW 135d GTR) were able to contribute to this good result at the VLN opening round.

The next winners will be declared on 27th April with the second round of the season on the calendar, the 55th ADAC ACAS H&R Cup race. The start to the race over four hours will be given at 12 o’clock.