The “Green Hell” at its best 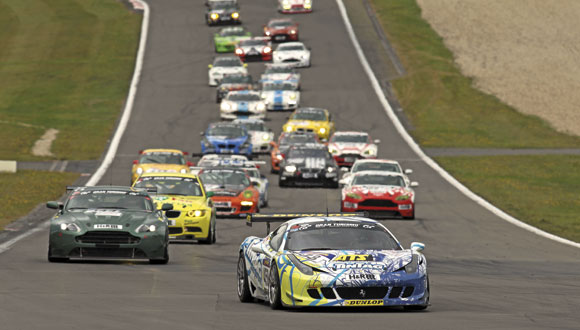 Boredom will remain to be a foreign word at the ninth round of the VLN endurance racing championship. At the ROWE 250-Miles-Race on Saturday, 29th September, more than 180 cars will contribute to providing a perfect romantic autumn weekend around the Nordschleife. The entry list includes two famous names for the race running over the distance of four hours. In addition to the regular drivers in this most popular National race series, former Formula 1 driver Christian Danner (Munich) and the most successful DTM driver of all time, Bernd Schneider (Switzerland), will join the grid. The entrance all around the Nordschleife is free. Access to the open grandstands at the Grand Prix Circuit, to the paddocks as well as to the starting grid will be possible at the family-friendly price of 15 Euro per person. Children up to the age of 14 have free entry. Tickets will be available on-site at the cash boxes.

Whilst Bernd Schneider will join the cockpit of the Mercedes-Benz SLS AMG GT3 entered by Black Falcon with Jeroen Bleekemolen from the Netherlands, Christian Danner will take it a little easier. The RTL Formula 1 expert will drive a Mini of the team Schirra motoring, together with Friedrich von Bohlen und Halbach (Heidelberg/ Germany) and Markus Oestreich (Petersberg/ Germany). “I know Marianne and Joachim Schirra since very long”, informs Danner. “In 2005, I was still driving a car of the team in the MINI Challenge and even won in Spa-Franchorchamps. I am really delighted that I now have the possibility to start in the endurance racing championship with the Schirra-MINI.” Team manager Joachim Schirra adds: “It will be interesting to see how Christian Danner will cope with the Nürburgring Nordschleife in the MINI. I am anyhow very much looking forward to the race.” Schneider, too, is happy to be able to race once again at the Nürburgring Nordschleife towards the end of the season. “Fantastic that I have the opportunity this year again to start in the endurance racing championship with the SLS AMG GT2 for the team of Black Falcon. I am pretty sure that Jeroen and I will have a lot of fun – let us see where we will finally be classified.”

Whereas they have scored the first victory for the Audi R8 LMS ultra of the team Raeder Motorsport at the eighth round, Christian Hohenadel (Quirschied/ Germany) and Thomas Mutsch (Bitburg/ Germany) will now become the hunted. The third in this team, Frank Biela (Monaco) will change to the other Audi team of Phoenix-Racing for the ninth VLN round and share the cockpit with Christopher Haase (Kulmbach/ Germany). The crew in the sister car is made up of Christer Jöns (Ingelheim/ Germany) and Luca Ludwig (Bornheim/ Germany). In addition to the SLS GT3 AMG of Black Flacon driven by Schneider and Bleekemolen, ROWE RACING will as usual be represented with two gullwing race cars. The car with start number 6 will be driven by Michael Zehe (Flörsheim-Dalsheim/ Germany), Marko Hartung (Wallroda/ Germany) and Mark Bullit (USA) and the team in the sister car with start number 7 will be composed of Roland Rehfeld (Blenkenfelde/ Germany) and Nico Bastian (Frankfurt/ Germany). Timbuli-Racing, too, will be strongly represented at this ninth round. For the first time in the current season, the three regular drivers Norbert Siedler (Austria), Marco Seefried (Wemding/ Germany) and Marc Hennerici (Mayen/ Germany) will all together constitute the drivers’ team in the yellow Porsche 911 GT3 R. Their competitors in the other Porsche race cars should however not be underestimated; Manthey Racing, Frikadelli Racing, the Haribo Racing Team as well as Pinta Racing with Christian Menzel (Kelberg/ Germany) who joins the team in addition to Michael Illbruck (Unterföhring/ Germany) for the first time.

The situation in the Championship classification: All provisional!
At this ninth race, one result will for the first time in the season be deleted regarding the Drivers’ Championship in the VLN endurance racing championship Nürburgring. Due to a protest and the subsequently lodged appeal, the results of the 6h ADAC Ruhr-Pokal-Rennen are still provisional. The protest was lodged against a car in class SP10 in which the temporary championship leaders Wolfgang Weber (Vilshofen/ Germany), Marcel Belka (Lehrte/ Germany) and Norbert Bermes (Krefeld/ Germany), too, are competing. The Aston Martin Vantage of Mathol Racing is in fact not involved in the protest but the trio is currently still missing one result in the Drivers’ Championship as, in compliance with the Sporting Code, the class classification will remain provisional until the appeal decision has been taken.

If the deletion of two results is applied right now, two teams turn out to have the best chances on gaining the title in 2012. Jannik Olivo and Elmar Jurek (both from Berlin) have scored six class wins with their Renault Clio in class Cup3. As is known, the Renault series always has a lot of competitors in their class and thus the two drivers have collected a lot of championship points following the successful VLN formula for the allocation of points. In the top of the championship classification are also Christian Krognes (Norway), Dominik Brinkmann (Dortmund/ Germany) and Ullrich Andree (Cologne) with their Volkswagen Scirocco GT24 of the team LMS Engineering. They have scored their points with six victories in the class of VLN Specials up to 2000 cc cylinder capacity with turbo. Whilst the Clio duo has made only one mistake so far, the points scored by the LMS team already include two weak results. So Krognes, Brinkmann and Andree imperatively must score points in the remaining races to conserve their chances on a title win. Olivo and Jurek once finished in second place only but still scored a good points result. They can afford one more mistake – or, in other words: If they win their class at the ROWE 250-Miles-Race, the title can hardly be taken away from them.

If both teams make a mistake, Belka, Bermes and Weber come in again. The driver trio would be in the lead with six wins in the class of GT4 cars, depending on the appeal decision maybe even seven, even though on the average there are less competitors in their class than in the two other ones.

Excitement is guaranteed when the drivers will start into the ‘Green Hell’ at the ROWE 250-Miles-Race at 12 o’clock exactly on Saturday. The starting grid will be based on the results achieved in the timed practice on Saturday morning between 08:30 and 10:00hrs. A one hour summary of the race will be broadcasted in the channel Sport1 already on Tuesday, 2nd October, at 17:30hrs with a repeat on 13th October at 09:45hrs.