3-2-1 – Raeder wins after a tactical masterstroke 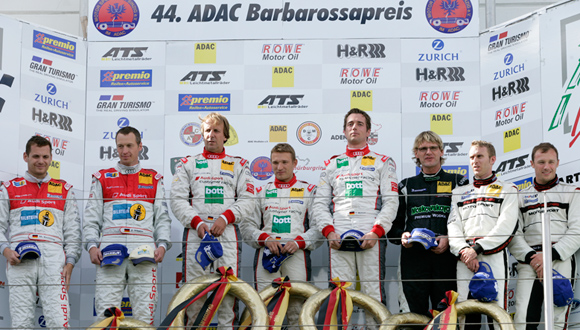 The winners of the 44th ADAC Barbarossapreises are Frank Biela (Monaco), Christian Hohenadel (Quierschied/ Germany) and Thomas Mutsch (Bitburg/ Germany). After their third and second places in the two previous rounds of the VLN endurance racing championship at the Nürburgring, this first triumph of the driver trio underlines the upwards trend of the Audi customer team of Raeder Motorsport. In addition to the strong performance of the drivers, the excellent pit stop strategy contributed in particular to the fantastic result. Their advance ahead of the second placed Phoenix Audi with drivers Marc Basseng (Neusalza-Spremberg/ Germany) and Frank Stippler (Bad Münstereifel/ Germany) was 1.748 seconds. The top three were completed by the Manthey-Porsche driven by Jochen Krumbach (Eschweiler/ Germany), Timo Bernhard (Dittweiler/ Germany) and Patrick Pilet (France). A one hour summary of the race will be shown in channel Sport1 on Wednesday 29th August at 17:30hrs.

The driver trio of the Manthey team achieved pole position in the timed practice with a time of 8:22.206 minutes when the track was getting more and more dry. In accordance with the good old tradition in the Manthey team, the rookie at the Nordschleife, Patrick Pilet, had the honour to proceed to the start turn. Right after the start, he came under strong pressure applied by Marc Hennerici (Mayen/ Germany) in the Timbuli-Porsche. The Frenchman, however, was able to withstand the pressure and changed the 911 race car in the lead to Krumbach, who has already scored two wins in the current season. “My stint was really perfect”, was Pilet happily. “I felt the pressure but the instruction of my team was very clear: Stay in the front as long as you feel comfortable. And as I felt extremely well in the Manthey Porsche, I just did everything to defend my lead.” An exciting battle between Krumbach and Basseng followed which ended up in a collision of the two cars at the pit lane access. “I had a few problems with my brakes so that I slightly hit the rear of the Manthey Porsche – that was not on purpose and I am really sorry”, explained Basseng after the race. Even though Bernhard complained about an irregular track of the Manthey Porsche during his final stint he nevertheless was able to complete fast lap times. In the 20th lap, the Porsche works driver even scored the fastest lap of the team with 8:12.726 minutes. Bernhard, in the lead, came to the pits a few laps after the race end and lost his first place whilst the team was refuelling. Due to the advanced pit stop, the Raeder team had completely kept out of all fights and secretly and quietly achieved a small advance. “Our strategy today had been an important factor for our success”, said Biela. “Furthermore, wasn’t a win today after places three and two in the previous races the logical consequence?” Mutsch who had to defend his place in the last stint against the attacks of Stippler was very happy with his first VLN victory. After his heavy test accident at the beginning of the year, Bernhard was happy to be back on the podium! “I am really happy to be back again. I had some fantastic battles during the race and I really felt very well. We could have achieved more today, so I all the more wish to still score a victory later this year.”

Behind the top three finished the Timbuli-Porsche for the second time in a row into fourth position. The Falken-Porsche became sixth ahead of the second Phoenix R8. The fastest Mercedes-Benz SLS AMG GT3 was driven by Alexander Roloff (Berlin) and Roland Rehfeld (Blankenfelde/ Germany), entered by the team ROWE RACING, who finished in seventh place.

The win in the group of Cup vehicles was scored by Uwe Alzen (Betzdorf/ Germany) and Philipp Wlazik (Gladbeck/ Germany) in a Porsche 911 GT3 Cup. The group H victory went to Hubert Nacken (Steißlingen/ Germany) and Ulli Packeisen (Wuppertal/ Germany) and the class of VLN series production cars was won by Tim Scheerbarth (Dormagen/ Germany), Carsten Knechtges (Mayen/ Germany) and Steve Jans (Luxembourg) in their BMW M3 of the team Black Falcon. The closest finish was recorded in class SP4T. Anja Wassertheurer (Stuttgart/ Germany) and Daniela Schmid (Austria) in the Audi TT-RS of the FH Cologne Motorsport took the chequered flag with an advance of 1.050 seconds ahead of another Audi from the Ingolstadt factory entered by Raeder Motorsport and driven by Christoph Breuer (Nettersheim/ Germany) and Patrick Kaiser (Liechtenstein).

In the lead of the championship, still provisional due to a protest lodged at the seventh round, are Elmar Jurek and Jannik Olivo (both from Berlin). The driver duo scored their sixth victory in the class of Renault Clio race cars.

The next round of the VLN endurance racing championship Nürburgring, the 36th DMV 250-Meilen-Rennen organised by the AC Monheim, will take place on 29th September and run over the distance of four hours.