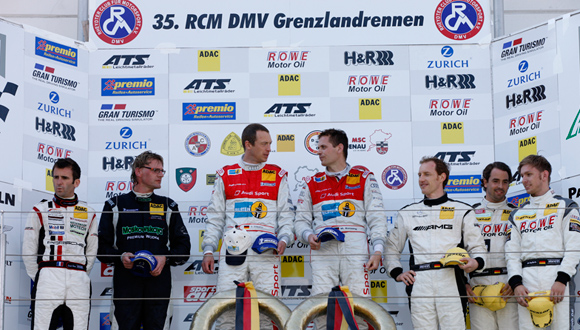 As winners of the 35th RCM DMV Grenzlandrennen, Marc Basseng (Neusalza Spremberg/ Germany) and Frank Stippler (Bad Münstereifel/ Germany), climbed up onto the podium with a swell of pride in their chests. The driver duo hereby achieved a new distance record with the Audi R8 LMS ultra of the team Phoenix Racing. Never before in the history of the VLN endurance racing championship Nürburgring did the winners of a 4 Hour Race complete a distance of 29 laps (= 706.701 kilometres). With a gap of 26.881 seconds behind, Jochen Krumbach (Eschweiler/ Germany) and Romain Dumas (Switzerland) took the chequered flag into second position with their Porsche 911 GT3 R entered by Manthey-Racing. The top three were completed by Thomas Jäger (Munich), Alexander Roloff (Berlin) and Jan Seyffarth (Querfurt-Leimbach/ Germany). The driver trio of ROW RACING who won the last race were thrown back in the field after a tyre damage in the first half of the race but made their way up again in the second half to finally finish on the podium. A one hour summary of the exciting sixth round of the season will be shown in channel Sport1 on Thursday, 26th July, at 18:30hrs.

The man of the day was Kai Riemer (Leipzig/ Germany) with the McLaren MP4 who completed the first kilometres in the lead of a race for the British super sports car. Riemer took the start from second grid position and went into the lead already before the first corner. He was able to defend this place over four laps with the very strong competitors following close by. At the first pit stop, Riemer changed to Henri Moser (Switzerland) who had to stop the race in his very first lap after a collision with a car to be lapped at the section Hatzenbach. “Finally I had the chance to show my potential”, said Riemer after the race. “The start really gave me the creeps, a former DTM driver on my right side and a Porsche works driver right behind me. Even though we didn’t make it to the finish, the first laps had been of extreme importance for the team. We are finally just starting with the development of our car.”

The race continued to remain full of suspense. One hour before the race end, the Manthey-Porsche, leader at that time, and the Phoenix-Audi came to the pits with a distance of less than one second between each other. Right after the service stop, Basseng put on a fireworks behind the steering wheel of the R8 during the following laps. Krumberg, in contrast, was struggling with his first set of tyres. “The tyres were not perfect at all so that I was not able to attack – everything was running perfectly again after I changed to a new set towards the end of the race. Second place again is an excellent success for me.” Basseng celebrated his 24th overall victory in the endurance racing championship and commented his road to this success as follows: “With these strong competitors in the field, you cannot just take it easy during the race. So I was pushing very hard at the beginning of my second stint to ensure a little advantage over Jochen towards the race end.” Third-placed Thomas Jäger, too, was happy after the race: “In particular considering our damaged tyre, we are very happy with our third place. We have a good speed and will fully attack again at the 6h Race in two weeks time.”

Behind the top three, Michael Illbruck (Unterföhring/ Germany) and Robert Renauer (Jedenhofen/ Germany) finished the race in fourth position in the Porsche 911 GT3 R of the team Pinta Racing, followed by Klaus Abbelen, Sabine Schmitz (both from Barweiler/ Germany), and Christopher Brück (Cologne) in fifth place with the Frikadelli-Porsche. Behind the second ROWE-SLS, Andreas Gülden (Reifferscheid/ Germany), Marco Seefried (Wemding/ Germany) and Marc Busch (Bensheim/ Germany) celebrated their second win in a row in class SP 7 (VLN Specials up to 4000 cc cylinder capacity). The driver trio hereby benefited from the bad luck suffered by the Kremer-Porsche and drivers Wolfgang Kaufmann (Molberg/ Germany) and Florian Fricke (Nienstädt/ Germany) who had to retire in the penultimate lap due to technical failure.

For the fourth time this year already, the fastest Cup-Porsche was driven by Christian Menzel (Kelberg/ Germany) and Wolfgang Kohler (Aldingen/ Germany). The winners in group H were Andreas and Ralf Schall (both from Dornstadt/ Germany) in a Mercedes-Benz 190. With this result, Andreas Schall celebrated his 40th group victory. Carsten Knechtges (Mayen/ Germany), Tim Scheerbarth (Dormagen/ Germany) and Steve Jans (Luxemburg) won class V6 with their BMW M3 entered by Black Falcon and also the group of VLN standard cars. With their fifth win in class GT4, Norbert Bermes (Krefeld/ Germany) and Marcel Belka (Lehrte/ Germany) defended their lead in the championship with the Aston Martin Vantage V8 of the team Mathol-Racing. Their advance ahead of second-placed Müller / Thiemann / Wirtz after six of ten VLN races now is 3.82 points.

In two weeks time already, on 4th August 2012, the highlight of the VLN endurance racing season Nürburgring will take place with the 6h ADAC Ruhr-Pokal-Rennen, the longest race of the season running over six hours.