Hot action at the Nordschleife against low temperatures 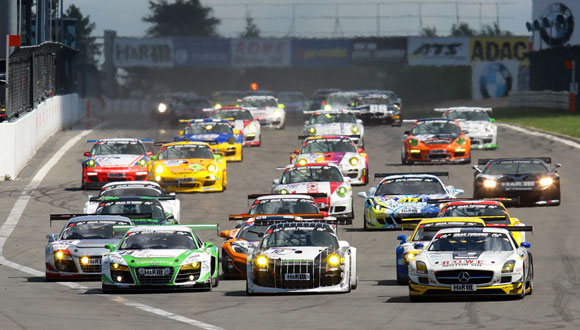 After the fantastic fifth VLN round which, due to its exciting final, is still very much talked about, the VLN endurance racing championship Nürburgring sill start its second half of the season with the 35th RCM DMV Grenzlandrennen. And the slogan is – due to the second subject everybody is currently talking about – “Hot action at the Nordschleife against low temperatures”. This most popular racing series in Germany is the perfect summer holiday entertainment for all ages. And even though the outside temperatures do not seem to be characteristic for a summer season, the spectacular race cars, starting from smaller series cars up to the most sophisticated GT3 race cars, will without doubt warm the hearts of each and every motor sport fan. At the event organised by the Rheydter Club für Motorsport, again more than 150 teams will start in the ‘Green Hell’. Entrance all around the Nordschleife is free. Access to the open grandstands, to the paddocks and to the starting grid will be available again at the family-friendly price of 15 euro per person. Children up to 14 years are free. Tickets will be available on-site at the ticket boxes. All kind of information around the endurance racing championship are available on the official website www.nuerburgring-langstrecken-serie.de as well as on facebook under www.facebook.com/vln.de.

The 52nd ADAC Reinoldus-Langstreckenrennen has very impressively demonstrated that quality is the key factor in the VLN endurance racing championship, rather than only quantity. Even though the number of cars on the starting grid was a little lower than usual, the fight about the overall victory and about the positions on the podiums in the more than 20 classes provided nevertheless motor sport on highest level. And this situation will most probably become apparent at the sixth round of the season, too. Ten German Länder currently have summer holidays. Consequently, again around 150 to 160 cars may be expected at the start, amongst those, however, a number of highlights.

All of the three most successful teams of the current season will be at the start. Jochen Krumbach (Eschweiler/ Germany), the double winner so far, in the pinstripe Porsche of Manthey Racing will be assisted by Romain Dumas from Switzerland. Whilst the team failed to win the fifth race by the razor-thin gap of 0.338 seconds, they wish to score their third victory now. To spoil this target, the ROWE team is getting some reinforcement on board. In addition to Jan Seyffarth (Querfurt-Leimbach/ Germany) and Alexander Roloff (Berlin), who recently celebrated their first victory of the season, Thomas Jäger (Munich) will share the cockpit of the high-performance Mercedes-Benz SLS AMG GT3. A dream team has been entered by Phoenix-Racing in the Audi R8 LMS ultra. The drivers Marc Basseng (Neusalza Spremberg/ Germany) and Frank Stippler (Bad Münstereifel/ Germany) won the fourth round this year and are also just crazy to score another success. Pedro Lamy will make his racing debut at the Grenzlandrennen in a McLaren MP4. The ex-formula 1 star and today’s sports car all-rounder had participated in the first championship races of the VLN endurance racing championship in a BMW Z4 GT3 of the Vita4One-Team. The Portuguese who lives in Lisbon will compete together with Sascha Bert (Ober-Ramstadt/ Germany) in the British super sports car of the team Gemballa. Same car, different team – the comeback of Arno Klasen (Karlshausen/ Germany). After the most experienced VLN privateer had to take a break after an accident at the 24h Race, he will now take part together with Rudi Adams (Ahütte/ Germany), Henri Moser (Switzerland) and Kai Riemer (Stuttgart7 Germany). Finishing fifth at the fourth race, the McLaren of Dörr Motorsport demonstrated its potential for the first time.

There will also be a return in class SP3T (VLN Specials up to 2000 cc cylinder capacity with turbo). Maik Rosenberg (Attendorn/ Germany), who last year played a major role for quite a while in the fight for the title, is finally coming back to the Nordschleife for the sixth VLN race. Due to personal and professional reasons, the race driver from the Sauerland in North Rhine-Westphalia could only start at several races this year and he is all the more looking forward to now compete in the Volkswagen Scirocco of LMS Engineering. Rookie Marcel Belka (Lehrte/ Germany) is in the lead of even two classifications in the current season. In addition to his first place in the VLN Junior Trophy, the 22 years old driver is also leading the drivers’ championship, together with the very Nordschleife experienced Norbert Bermes (Krefeld/ Germany). The driver duo has scored four wins in class GT4 with their Aston Martin Vantage V8. “Of course, there is a tough competition going on in both of these classifications and there will be a lot of suspense until the very last race”, says Belka. “But no one can now take away my lead at mid-season. This is a highlight for me, in particular in such a strong championship.”

The 35th RCM DMV Grenzlandrennen over the duration of four hours will start at 12 o’clock. The positions on the starting grid will be decided during the timed practice between 08:00 and 10:00hrs.