Round five may well provide some surprises 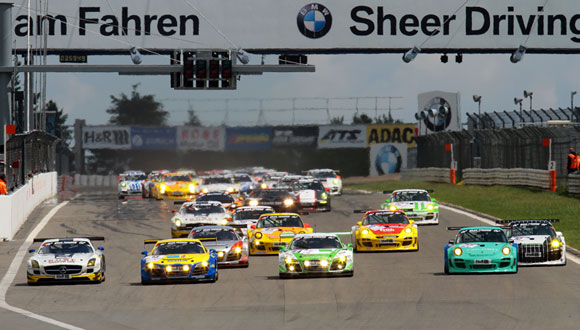 The first half of the VLN endurance racing championship season at the Nürburgring will be concluded on 7th July with the 52nd ADAC Reinoldus-Langstreckenrennen. And even though the previous four exciting races have already provided some special highlights this year, the fifth round may well give still some surprises. The driver search in the most popular National racing series in Germany is not only going on at the end of the season. Smaller and more comprehensive changes of drivers provide new combinations also during the current season. Due to summer holidays in nine Federal States, the list of entries at the race organised by the club Dortmunder MC is a little shorter than usual; amongst the usually more than 400 drivers in each race, there are a lot of fathers of a family not only in the group of the privateers. This will however not spoil the excitement in the battles about the overall victory and the top positions in all the various car classes. Even a grid made up of 150 or 160 cars is much more than any other racing series in Europe is able to provide. Entrance all around the Nordschleife is free. Access to the open grandstands at the Grand Prix Circuit, to the paddocks and to the starting grid will be available at the family-friendly price of 15 Euro per person. Children up to 14 years have free entry. Tickets will be available on-site at the ticket boxes. Any kind of information around the endurance racing championship is available in the internet on the official website www.nuerburgring-langstrecken-serie.de as well as on Facebook under www.facebook.com/vln.de.

The Schubert Team which has already been on top of the podium in the season 2012 will have its comeback in the endurance racing championship after having been absent at one race. The composition of the driver crew in this team is really promising. In addition to regular driver Claudia Hürtgen (Aachen/ Germany) and the champion of the Middle East Porsche GT3 Cup Challenge, Abdolaziz Al Faisal (Saudi Arabia), Klaus Abbelen (Baarweiler/ Germany) will join the team as guest driver in the Bavarian sports coupé. For the experienced hobby driver who is normally competing together with his live-partner Sabine Schmitz (Barweiler/ Germany) in the popular Frikadelli Porsche, this participation in the Z4 represents the possibility to look at something different. By the way, Sabine Schmitz will as usual contest the race together with Christopher Brück (Cologne) and Patrick Huisman (Netherlands) in the team-owned GT3 Porsche. A fresh wind is also blowing in the last winning team, the Phoenix Team. The local heroes from the village of Meuspath nearby the Nürburgring have again entered two highly competitive Audi R8 LMS ultra which will be driven by Christer Jöns (Ingelheim/ Germany) and Luca Ludwig (Bornheim/ Germany) as well as by Christopher Haase (Kulmbach/ Germany) and Christopher Mies (Heiligenhaus/ Germany). A 100 percent identical success of Marc Basseng (Neusalza Spremberg/ Germany) and Frank Stippler (Bad Münstereifel/ Germany) who scored the victory at the fourth race is hence excluded. This may be the chance for the second placed Team ROWE RACING which will contest the race with two Mercedes-Benz SLS AMG GT3 and the drivers Alexander Roloff (Berlin) and Jan Seyffarth (Querfurt-Leimbach/ Germany) as well as Michael Zehe (Flördheim-Dalsheim/ Germany), Marko Hartung (Wallroda/ Germany) and Roland Rehfeld (Blankenfelde/ Germany).

The young Steve Jans from Luxembourg will make his VLN debut with the SLS AMG GT3 entered by Black Falcon. He will be supported by Stephan Rösler (Lichtenfels/ Germany) who has already competed in eight races with the spectacular gullwing AMG race car. Furthermore, Jans will as usual compete in the close-to-production BMW M3 with start number 1, together with the current VLN champions Carsten Knechtges (Mayen/ Germany) and Tim Scheerbarth (Dormagen/ Germany). Timbuli Racing has contracted a new team member. Andreas Gülden (Reifferscheid/ Germany), former Formula 3 driver and chief instructor at the Nürburgring Driving Academy, will make his debut in the team with the SP7 Porsche. Marco Seefried (Wemding/ Germany) and Marco Busch (Bensheim/ Germany) will complete the team in the Porsche 911 with the eye-catching design. Seefried will be one of the double starters. Together with Marc Hennerici (Mayen/ Germany) and Dennis Busch (Bensheim/ Germany) he will also drive the Timbuli-GT3-Porsche. In the TinTag Ferrari, Pierre Kaffer (Switzerland) will complete the driver duo of Christian Kohlhaas (Andernach/ Germany) and Alexander Mattschull (Bad Homburg/ Germany). Kaffer had accompanied the development of the car from its very beginning and now completes the final set-up with his race participation in order to then release the car for the use of customers.

For the first time in the season, ‘Ed Nicelife’ will bring his strong Corvette C6 to the start in class SP8 (VLN Specials up to 6250 cc cylinder capacity). In addition to ‘Nicelife’, André Hauschild (Horneburg/ Germany) and Thomas Gerling (Uchte/ Germany) will share the cockpit of the US sports car. Endurance racing expert Jörg Viebahn (Engelskirchen/ Germany) will start in the very competitive Porsche Cup class with a new Porsche 911 GT3. The team is run by the Pro Sport Team based in Herschbroich/ Germany which is also responsible for the participation of the Seat Leon Supercopa, for the first time in the current season driven by Anders and Jonas Carlsson from Sweden. The two Scandinavian drivers are entered in class SP3T (VLN Specials up to 2000 cc cylinder capacity with turbo). Jürgen Freiburg and Norbert Kraft (Hagen/ Germany) will contest the race on Saturday with their classical VW Corrado, entered in class H2 (Group H up to 2000 cc cylinder capacity).

The 52nd ADAC Reinoldus-Langstreckenrennen over the distance of four hours will start at 12 o’clock. The grid positions will be determined in the timed practice to take place between 08:30 and 10:00hrs on the same day.