Attractive grid at the ‘home game’ 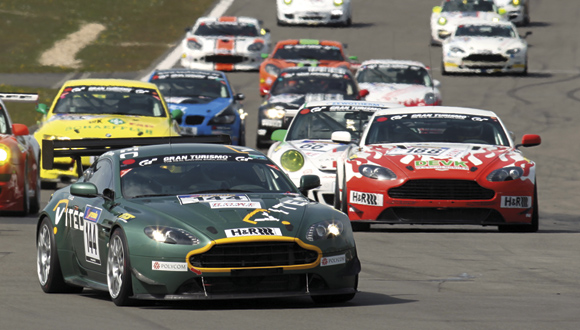 The 43rd Adenauer ADAC Rundstrecken-Trophy on Saturday, 23rd June, will figure an attractive grid of more than 170 cars. The fourth round of the VLN endurance racing championship is considered to be a ‘home game’ as the organiser is the MSC Adenau e.V. The most important news for the fans of this most popular national racing series is that there will again be about two dozens of top teams fighting for the victory, first of all the winning team of the 24h Race at the Nürburgring, Phoenix-Racing with drivers Frank Stippler (Bad Münstereifel/ Germany) and Marc Basseng (Neusalza Spremberg/ Germany) in the Audi R8 LMS ultra. Entrance all around the Nordschleife is free. Access to the open grandstands at the Grand Prix Circuit, the paddocks and the starting grid is available at the family-friendly price of 15 Euro per person. Children up to 14 years have free entry. Tickets are available on-site at the ticket boxes. Comprehensive information all around the endurance racing championship is available in the internet on the official website www.nuerburgring-langstrecken-serie.de as well as on Facebook under www.facebook.com/vln.de.

In addition to the Phoenix Team which has entered another R8 ultra for René Rast (Stolzenau/ Germany) and Luca Ludwig (Bornheim/ Germany), further top teams will be at the start in the GT3 class SP9, to start with ROWE-Racing with two Mercedes-Benz SLS AMG GT3, to continue with Dörr-Motorsport with a McLaren MP4, Raeder Motorsport with another Audi R8 and Jürgen Alzen Motorsport with the spectacular Ford GT3 up to the Porsche-Teams of Falken Motorsport, Frikadelli-, Manthey-, Pinta- and Timbuli Racing – many serious candidates for a victory. With 15 cars, a very good entry has also been received in class SP7 (VLN-Specials up to 4000 cc cylinder capacity). Michael Bäder (Mössingen/ Germany) and Tobias Hagenmeyer (Cologne) will celebrate a comeback and compete against a considerable number of Porsche 911 GT3 race cars with their spectacular BMW Z4. It is about one year ago that the driver duo was for last time at the start with the V8 Coupé and finished into second place in their class.

Markus Palttala (Finland) and Maxime Martin (Belgium) will make their way into the Eifel region directly from the Le Mans 24h Race. The driver duo will start in GT4 class SP 10 with a Porsche 911 GT3 prepared by raceunion Teichmann Racing, a team starting for the organising MSC Adenau. In class SP 10, the two sports car experts will have to compete against a handful of BMW M3 race cars as well as some Aston Martin Vantage. After an accident in a test before the start of the VLN season 2012, Christian Schmitz (Herresbach/ Germany), a promising rookie of the MSC Adenau, will now compete in his first race of the year. He will share the cockpit of the Opel Astra OPC of Kisslling Motorsport with Hannu Luostarinen (Finland) and Opel Head of Sport Volker Strycek (Dehrn/ Germany). The driver trio will compete in class SP3T (VLN-Specials up to 2000 cc cylinder capacity with turbo) and will race against a great variety of other competitors. The entered cars vary from Audi TTS to Mitsubishi Lancer, Seat Leon and Volkswagen Golf and Scirocco.

Prizegiving ceremony for the first time on the pit roof
After the finish of the 43rd Adenauer ADAC Rundstrecken-Trophy, the successful drivers will receive their awards on the pit roof. The event will start at 18:00hrs and is open to the public. All the spectators may enjoy the ceremony from the roofed beer garden where plenty to eat and drink will be availably and they will have a special view onto the paddocks.

Supporting event: The NEC Formula Renault 2.0
Since its foundation in the year 2006, the NEC Formula Renault 2.0 has become established as a rising series with a high reputation for rookies. Drivers coming from 20 different countries will this year do their best to have a perfect start into a great motor sport career. Today’s Grand Prix stars such as Felipe Massa, Kimi Räikkönen, Lewis Hamilton and Heikki Kovalainen have gained their first experiences in the Formula Renault race cars. The programme of the 43rd Adenauer ADAC Rundstrecken-Trophy includes two races scheduled for Friday and Saturday.