More than 180 cars expected for the opening round 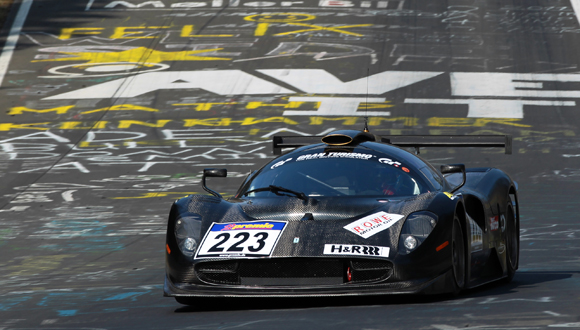 The racing season at the most beautiful race track of the world, the Nürburgring Nordschleife, will start with a traditional event on a high sporting level. The kick-off for the 2012 VLN endurance racing championship season will take place on 31st March with the 59th ADAC Westfalenfahrt. On Saturday at 12 o’clock exactly, more than 180 cars will take the start to the race over the four hour distance. The grid will include a colourful variety of close-to-production competition touring cars up to the most sophisticated GT3 race cars. Entrance all around the Nordschleife is free. The tickets with admission to the open grandstands at the Grand Prix Circuit, to the paddocks and to the starting grid will be available at the family-friendly price of 15 euro per person. Children up to the age of 14 years are free. Tickets are available on-site at the cash boxes. All kind of information around the endurance racing championship is available in the internet on the official website www.vln.e as well as on Facebook under www.facebook.com/vln.de.

The car with start number 1 will be driven by title holders Carsten Knechtges (Mayen/ Germany) and Tim Scheerbarth (Dormagen/ Germany). The current champions in the BMW M3 entered by the Black Falcon Team TMD Friction will be supported Steve Jans from Luxembourg. The driver trio will compete in the very competitive class V6 (VLN standard production cars up to 3500 cc cubic capacity). “It might perhaps not be appropriate to think of defending the title right at the very first championship race”, says Scheerbarth. “But to be really honest, this is exactly what our target must be. Black Falcon has demonstrated in the past years that it is possible.” Before 2011, the team which is based in the Eifel region had already scored two successive titles in 2008 and in 2009. Manuel Metzger (Zollikon/ Germany) who won the title together with Knechtges and Scheerbarth in 2011 will this year participate in one of the two Mercedes Benz SLS AMG GT3 of the team Black Falcon. He will share the cockpit with former DTM driver Jeroen Bleekemolen from the Netherlands and the endurance racing expert Ralf Schall (Dornstadt/ Germany).

Famous names can be found in the list of crews in the other top cars, too. René Rast (Stolzenau/ Germany), Oliver Jarvis (Great Britain), Frank Stippler (Bad Münstereifel/ Germany), Christopher Haase (Kulmbach/ Germany) and Markus Winkelhock (Berglen-Steinach/ Germany) will start for the team of Phoenix-Racing in two Audi R8 LMS. ROWE RACING will be represented by Klaus Graf (Dornham/ Germany), Thomas Jäger (Munich/ Germany) and Alexander Roloff (Berlin/ Germany) in one of the two SLS AMG GT3. The BMW Team Schubert with the Z4 is made up of Dirk Adorf (Michelbach/ Germany), Dirk Müller (Switzerland) and Jörg Müller (Monaco). Into a Porsche entered by Falken Motorsports, Peter Dumbreck (Great Britain) and Wolf Henzler (Nürtingen/ Germany) will fight for points as will Timbuli Racing with Marc Hennerici (Mayen/ Germany) and Norbert Siedler (Austria). The team of Sabine Schmitz and Klaus Abbelen (both from Barweiler/ Germany) in the Firkadelli Porsche 911 will be completed by two very experienced race drivers, Christopher Brück (Cologne/ Germany) and Patrick Huisman from the Netherlands. Amongst the top drivers are also Michael Illbruck (Unterföhring/ Germany) who will share the Pinta-Porsche with Altfried Heger (Essen/ Germany). The new Audi R8 LMS entered by Raeder Motorsport will be driven by Frank Biela (Monaco), Luca Ludwig (Bornheim/ Germany) and Christian Hohenadel (Quierschied/ Germany). Amongst the more exotic crews on the starting grid will be Nicola Larini, Fabrizio Giovanardi (both from Italy) and Manuel Lauck (Lebach/ Germany) driving the P4/5 Competizione M as well as Jürgen Alzen (Betzdorf/ Germany) and Artur Deutgen (Majorca) with their Ford GT entered by the team H&R Spezialfedern. True highlights are the two brand new McLaren MP4 of the team Dörr-Motorsport which will make their debut at the Nordschleife at the first VLN race. There has hardly been a greater variety in the top group of the endurance racing championship. Considering the technical specifications, almost every fourth car on the grid should be able to finish on the podium.

Considering that about one fourth of all the cars are in the top group, this means in the reverse conclusion that three fourth make up exactly this colourful and sympathetic group of cars on the grid which makes the endurance racing championship such an outstanding race series. Whether it is Nadir Zuhour from the United Arab Emirates in a Renault Clio, Toshiya Ito from Japan in the close-to-production BMW 320SI, Ilkka Kariste from Finland in the small Opel Corsa OPC, Alexander Antonov from Russia in a Honda Civic Type R or Willi Friedrichs from Schalksmühle in Western Germany with his Porsche 911 – all these committed privateers create the unique appeal of this series. They are the ones to which all the numerous and true fans around the Nordschleife create a close relationship, for which they are cheering and with which they are suffering when very often just a small technical failure spoils the success after all the work completed over weeks and days. The VLN endurance racing championship lives from a refreshing mixture of top stars and club racing.