Another world premiere at the VLN Langstreckenmeisterschaft Nürburgring 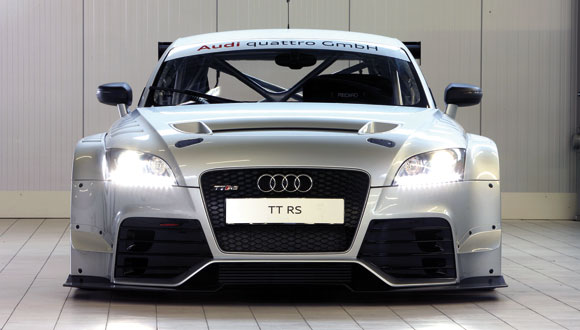 The ninth round of the VLN Langstreckenmeisterschaft will take place Saturday this week. Even though the season is slowly but surely coming to an end, more and more new race cars are joining this most popular endurance race series in Europe. The new Audi TT RS will thus for example have its debut at the 34th DMV 250-Meilen-Rennen organised by the AC Monheim. The factory which is based in Ingolstadt/ Germany will present their new customer sport program which is scheduled to range in the upper middle field of the spectacular starting grid in the endurance race series. The newly developed competition touring car will be driven by five time VLN winner Marc Hennerici (Bonn/ Germany) and Christopher Mies (Kempten/ Germany), who finished second in this year’s GT Masters series. The car is entered in class SP4T (VLN Specials up to 2.500 cc cylinder capacity with turbo). The entry for visitors is free all around the Nordschleife. Tickets with admission to the paddocks and to the open grandstands at the Grand Prix Circuit are available on-site for the family-friendly price of 12 Euro. The timed practice session will take place between 08:30 and 10:00hrs and the start to the race over the distance of four hours will be given at 12 o’clock exactly. A 30 minutes summary of the race will be broadcasted in Sport 1 on 23rd October at 09:45hrs.

Car manufacturers are more and more relying on customer sport programs. This strategy, which has since many years been successfully pursued by Porsche with several 911 models, represents an example followed by many others. BMW is really experienced in this business since quite a while, Audi applies the concept since last season with the R8 LMS and at the last VLN round, the SLS AMG GT3 of Mercedes-Benz started its racing career. Today, customer sport is not only feasible in the worldwide successful and established GT3 class which is proved Renault, a partner in the endurance race series, with the Clio in the class of 2 litres VLN Specials. A complete package is offered at a fair price and there is no doubt that the customers have fun. Audi is now also entering this ground. The project around the TT RS is based on a thoroughbred competition body which may be equipped with modules of different engines and components. The first race participation with the experienced drivers Hennerici and Mies shall hereby serve both to determine the position amongst the competitors and to further develop the car. The race car is powered by a 5-cylinder TFSI Audi engine and the classification in class SP4T shall allow for fast lap times of below nine minutes if the track is dry.

Even two of the aforementioned SLS AMG GT3 are entered for the DMV 250-Meilen-Rennen, one of which will be driven by Thomas Jäger (Munich) and Christopher Haase (Kulmbach/ Germany) and the other one by Bernd Schneider (Bottighofen/ Germany) sharing the steering wheel with Chris Mamerow (Castrop-Rauxel/ Germany). After the brilliant performance at the Barbarossapreis race, it will be exciting to see how the GT3 race car driven by Mamerow, an absolute expert at the Nordschleife, will be able to perform. The BMW factory team will also come back again to the Nürburgring for the end of the season. Dirk Adorf (Michelbach/ Germany) and Jörg Müller (Monaco) will drive a BMW Z4 entered in class GT3. The entry list of this class includes also four Audi R8 LMS. The spearhead of Phoenix-Racing will be driven by Marc Basseng (Neusalza-Spremberg/ Germany) and Frank Stippler (Bad Münstereifel/ Germany). Black Falcon has entered Sean Patrick and Sean Paul Braslin (both from Ireland), Kenneth Heyer (Wegberg/ Germany) will complete the team. The drivers of the two race cars entered by the team ‚Audi race experience Team Joest’ will be Florian Gruber (Aham/ Germany), Josef Haider (Austria) and Johannes Stuck (Liechtenstein) as well as Marco Werner (Switzerland), Dennis Huber (Königsstein/ Germany) and Horst von Saurma-Jeltsch (Stuttgart/ Germany). They all will chase the successful Manthey Porsche which have already scored six victories in the current season. Timo Bernhard (Dittweiler/ Germany) Arno Klasen (Karlshausen/ Germany) and Lucas Luhr (Switzerland) will start with number 114, Lance David Arnold (Duisburg/ Germany), Richard Westbrook (Great Britain) and Christian Menzel (Kelberg/ Germany) will drive the Haribo-Porsche with start number 88.

Apart from the decision about the overall win, a focal point of the event will definitely also be the fight about the title. With their constant top performances, three teams will decide the championship amongst themselves: Alexander Böhm (Kelberg/ Germany), Philipp Leisen (Irrel/ Germany) and Carsten Knechtges (Mayen/ Germany) of the Team Black Falcon, Mario Merten (Nürburg/ Germany) and Wolf Silvester (Nürnberg/ Nürnberg) of Bonk Motorsport as well as Elmar Deegener (Stelzenberg/ Germany), Jürgen Wohlfarth (Murrhardt/ Germany) and Christoph Breuer (Nettersheim/ Germany) of Raeder-Motorsport.