Excellent grid at the highlight of the season 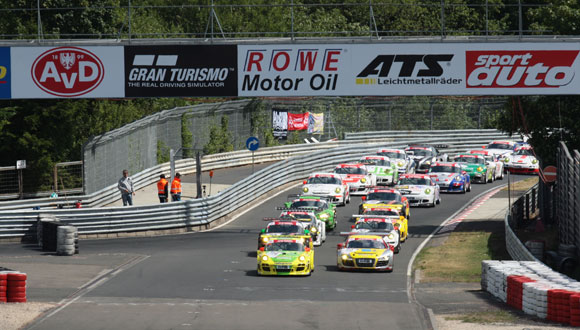 The highlight of the VLN Langstreckenmeisterschaft Nürburgring will come very soon. The 6h ADAC Ruhr-Pokal-Rennen ‘um die Pokale der Opel-Werke Bochum’ on 31st July will see an excellent grid. Up to now, the organising MSC Ruhrblitz Bochum has already received 190 entry applications. So the race over the distance of six hours promises above all exciting action around the 24.369 kilometres long combination of the Nürburgring short connection and the Nordschleife, in addition to a great variety in the performances as all kinds of race cars, from standard series production cars in racing trim up to the most sophisticated race car with more than 600 HP will be represented. The positions on the starting grid for the race will be decided after the timed practice to take place in the morning between 8:30 and 10 hrs. The start light will then be switched on at 12 o’clock exactly and the field will start the race into the ‘Green Hell’. The entrance for the visitors at the Nordschleife is free again, like it is for all the races of this most popular endurance racing championship in Europe. Anybody wishing to get closer to the race cars inside the paddocks and the pits may purchase tickets at the box-offices at the family-friendly price of 12 Euros. These tickets give also admission to the grandstands at the Grand Prix Circuit – as for example to the impressive main grandstands opposite to the pit lane. This is a perfect place to watch the teams working on their cars. A 30 minutes summary about the race will be broadcasted in the channel Sport 1 on 7th August at 10:15hrs.

The fight between Audi and Porsche will be in the focus again at this highlight of the endurance racing season 2010. The team with Hans-Joachim Stuck (Austria) and Frank Stippler (Bad Münstereifel/ Germany), who finished the last three races in third position respectively, will be completed in their Audi R8 entered by Phoenix-Racing for this 6h Race by Luca Ludwig. The son of legendary racing driver Klaus Ludwig has meanwhile himself become quite known in sports car races. He knows the R8 like the back of his hands as the 21 years old racing driver is competing in the GT Masters with this super sports car from Ingolstadt already for the second year in a row. Manthey-Racing, the most successful Porsche team in the current season, too, has increased its crew. The two regular drivers Arno Klasen (Karlshausen/ Germany) and Timo Bernhard (Dittweiler/ Germany) will be supported in their Porsche 911 GT3 R by Christian Hohenadel (Quierschied/ Germany), the current leader in the GT3 European Championship. A fresh wind will blow into the GT3 class with the two BMW Z4 GT3 entered by Schubert-Motorsport and amongst others driven by the long distance race experts Claudia Hürtgen (Aachen/ Germany) and Jörg Viebahn (Engelskirchen/ Germany). The Audi race experience Team Joest will also have a come back at the Nordschleife. The Audi A8 of the eleven times Le Mans winner team will be driven by Dennis Hübner (Kranberg/ Germany), Torsten Krey (Herborn/ Germany), Horst von Saurma-Jeltsch (Stuttgart/ Germany) and professional race driver Marco Werner (Switzerland).

Great names, historic cars and alternative drives
Names of some outstanding drivers can not only be found in the big classes. US sports car specialist Randy Probst will drive a BMW M3 in the class of VLN series production cars up to 3.000 cc cylinder capacity, together with Mark White and Cooper McNeel (both from the United States). Former DTM star Kurt Thiim (Luxembourg) will compete together with his son Nicki (Denmark) and Christian Krognes (Norway) in a Seat Leon Supercopa.

Tradition obliges – in application of this slogan, the Opel specialists Olaf Beckmann (Oststeinbeck/ Germany) and Peter Haas (Lorsbach/ Germany) will enter two Manta in the class of group H vehicles up to 2.000 cc cylinder capacity for the race “um die Pokale der Opel-Werke Bochum”. The team will be completed by Bernhard Schmittner (Frankfurt/ Germany) as well as the long year Opel Head of the Sports Department Volker Strycek (Dehrn/ Germany). The quartet wants to go for a third successive class win at the 6h Race.

When long distances races are concerned, Heico Sportiv should not be forgotten. In 2007, the team achieved the first class victory with a bioethanol racing touring car and then another one in 2009. In 2010, they have already scored a class win at the 24h Race and Patrick Brenndörfer (Frankfurt/ Germany) and Martin Müller (Griesheim/ Germany) are committed to achieve another successful result at the 6h Race.

The projects around skateboard legend Titus Dittmann (Münster/ Germany) and rapper Smuda (Hamburg/ Germany, band ‘Die Fantastischen Vier’) are also based on ‘alternative’ fuels. Whilst Titus will compete together with his son Julius in a gas driven Dodge Viper, Smuda will bring the sporty Renault Megane Bio Concpet Car to the start. His team mates in the car powered by biodiesel fuel are Thomas von Löwis (Reutlingen/ Germany) and Michael Heigert (Budenheim/ Germany).