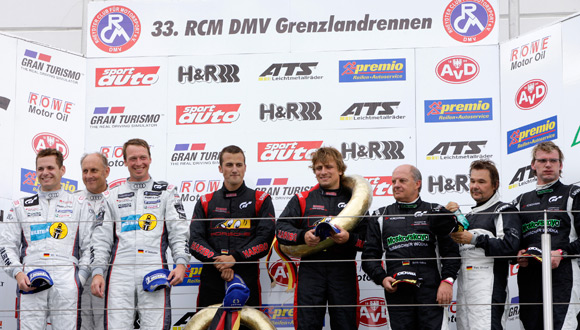 Lance David Arnold (Duisburg/ Germany) and Christian Menzel (Kelberg/ Germany) were beaming just like the goldbear which decorates their Porsche 911 GT3 R. After the 4 hours race distance and 28 completed laps, the duo of the Haribo Team Manthey took the chequered flag at the end of the 33rd RCM DMV Grenzlandrennen with an advance of 25.994 seconds ahead of the Audi R8 LMS of Phoenix-Racing. Hans-Joachim Stuck (Austria) and Frank Stippler (Bad Münstereifel/ Germany) were thus placed second for the third time in a row. For the first time on the podium this year finished Armin Hahne (Wimbach/ Germany), Jochen Krumbach (Eschweiler/ Germany) and Marc Gindorf (Monaco). The team which was also driving a Porsche GT3 entered by Manthey Racing finished with a gap of 4:54.128 minutes to the race winners. With their win in the class of VLN series production cars up to 3.000 cc cylinder capacity, Alexander Böhm (Kelberg/ Germany), Philipp Leisen (Irrel/ Germany) and Carsten Knechtges (Mayen/ Germany) in the BMW Z4 of the team Black Falcon went into the lead of the championship classification after this sixth round of the VLN Langstreckenmeisterschaft Nürburgring 2010. A 30 minutes summary of the 33rd RCM DMV Grenzlandrennens will be broadcasted in Sport 1 on 24th of July at 10:45hrs.

The pole position in the timed practice on the morning of the race day was gained by Romain Dumas (Switzerland) and Arno Klasen (Karlshausen/ Germany) with a lap time of 8:11.126 minutes. In the first laps, Dumas was in a hard battle with Arnold and Stippler about the race lead when he went off the track in the third lap on a wet track due to an accident in the section of Klostertal. The GT3 Porsche was so baldy damaged that the race was over for the team. The Haribo Porsche then had exciting fights with the Phoenix Audi and due to different refuelling strategies, there were several changes in the lead. Arnold/ Menzel finally turned out to be more successful. “This victory was more than overdue”, said Arnold after the race. “Each member of our team has done such a fantastic job from the very beginning of the season and we really deserved that win. We were fighting eye to eye with the Audi in the lead. It became quite tough towards the end when the temperatures were rising again.” Stipler on his part had an explanation why the Audi missed its first victory of the year 2010 again: „First of all, I have to extend a big compliment to the Phoenix Team because they have completely rebuilt the R8 in only four days. This had become necessary due to our accident at the fifth round. We did however not hundred percent succeed in finding the perfect set-up for the new car.” Stuck, who has meanwhile completely recovered after his accident in the last race, was nevertheless very motivated: “We will now carry out another test before the 6h race and then attack again.” On the question about his state of health, the Austrian answered: “I was back out on the Nordschleife last week already. If I had suffered just any kind of aches and pains, I would not have started today. I am totally ok again.” Former DTM star Hahne was happy with their first position on the podium in 2010: “Finally, we made it. Compared to our Porsche competitors, we have a different tyre supplier and we are improving step by step. The gap to the leaders is still important but I am very confident that this was not our last podium this year.”
Behind the top three finished Dirk Riebensahm, Christian Kohlhaas (both from Andernach/ Germany) and Christopher Brück (Cologne) in the Chrysler Viper entered by Vulkan-Racing-Team Mintgen-Motorsport into an excellent fourth position and celebrated their best result in the current season. Michael Zehe (Floersheim/ Germany), Marco Schelp and Alexander Roloff (both from Berlin) finally finished fifth in their Porsche 911 GT3 Cup-S entered by the Team Rowe Motorsport. Ralf Schall (Dornstadt/ Germany) together with Mike Stursberg (Wermelskirchen/ Germany) finished their first participation in the Haribo-Cup-S into place six.

The previous championship leaders Elmar Deegener (Stelzenberg/ Germany), Jürgen Wohlfarth (Murrhardt/ Germany) and Christoph Breuer (Nettersheim/ Germany) sufferend some technical problems and finished eleventh in their class only. So Böhm/ Leisen/ Knechtges in the BMW Z4 entered by Black Falcon now went into the lead. Wolf Silvester (Nürnberg/ Germany) and Mario Merten (Nürburg/ Germany), who had temporarily been shown in the championship lead this year with the BMW Z4 of the team Bonk-Motorsport, won the strong class of VLN Specials up to 2.000 cc cylinder capacity. They were followed by the Black-Falcon trio with drivers Rosenberg/ Dinstühler/ Akata in a BMW 320i ahead of Elmar Jurek (Berlin) into place three who won the Renault Clio Cup classification for the fourth time in the current season. “You always need also a little bit of luck, and luck was on our side this time”, said Jurek. Caused by illness, his regular team mate Jannik Olivo (Berlin) was this time replaced by Christian Franck from Luxembourg. Into places two and three of the Renault special classification followed the Clio drivers Jürgen Peter (Herzogenrath/ Germany) and „Rennsemmel“ (Nideggen/ Germany) as well as Uwe Kleen (Boxberg/ Germany) and Jacques Meyer (France).

The highlight of the season, the 6h ADAC Ruhr-Pokal-Rennen, will take place on 31st of July.

Editorial information: The results in class SP3T (VLN Specials up to 2.000 cc cylinder capacity with turbo) is suspended due to a protest, so the championship classification is provisional.