Start of the season makes everyone look for more 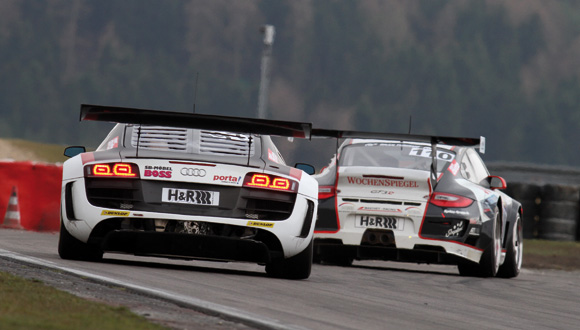 The start of the VLN Langstreckenmeisterschaft Nürburgring season was a real hit. Not less than 46 cars competed against each other in the big classes – and regarding their potential, each of those was able to finish on the podium.

The winner finally was the team which is sort of home at the Nordschleife: Manthey Racing. When team manager Olaf Manthey sends his drivers – starting from ambitious hobby drivers up to Porsche works drivers – out to race on the circuit, even double DTM Champions such as Mattias Ekström sometimes have a rough time. Experience at the ‘Green Hell’ can in no way be replaced by anything. Audi and BMW lost the competition this time but they are already making plans on how they can dominate the old ‘warhorse’.

One could assume that the hobby drivers were powerless against the works drivers, far from it! The fastest race lap in a Porsche was not at all set by a works driver such as Marc Lieb, Timo Bernhard, Jörg Bergmeister & Co. It was Oliver Kainz, in civil live owner of a car dealership living in Kottenheim/Germany. Together with his team mates Peter-Paul Pietsch and Michael Jacobs, he drove the Porsche 911 GT3 R of the Wochenspiegel Team Manthey up into fifth position. For racing drivers, too, it is correct that with experience you are halfway there.

Another remarkable success achieved by two privateers is the victory in the Porsche Cup class for the Weiland duo Andrej Dzikevic from Lithunia and Rodney Forbes from Australia. At the end of the four hours race, they could not only celebrate a class win but also place eight overall. With the comparatively weak Cup-Porsche, they put other teams with much stronger cars regarding their technical specifications in their place.

These are only two of many examples which underline that the VLN Langstreckenmeisterschaft Nürburgring stands for a fascinating mixture of top sports and of popular sports – all on a very high level. The fans can experience more of the series on 10th of April at the 35th DMV 4 Hour Race.